A blog from the Ontario Library Service

Today’s guest post is by Nadia Hamilton, founder and president of Magnusmode –  a groundbreaking app designed to help those with cognitive needs find their own way in the world.    Learn more aboy how this app is used in libraries, and about the SOLS consortia purchasing discount for MagnusCards!

MagnusCards is a new app with the bold mission of making the world more accessible to people with cognitive special needs. Creating greater access to library services is an important piece of connecting, engaging, and enabling people within their communities.

With Digital Card Decks (each one a task or activity) designed specifically for each library, MagnusCards guides users to complete tasks like signing up for a library card, finding a book, and returning a book. These are activities that are often insurmountable challenges for visitors with cognitive special needs, and libraries are seeing incredible results by offering MagnusCards as a response to the needs of their diverse communities.

Stephen, 36, is one such example. Stephen regularly visited his library, the County of Brant Public Library, as an avid and curious reader.  But he was dependent on library staff to show him where everything was, and was often waiting alone while they served other visitors or completed their own tasks.

So, when the County of Brant Public Library launched their new Magnus Card Decks, Stephen was one of their first testers. He was guided through the simple interface by a familiar library staff member, and began to explore on his own. 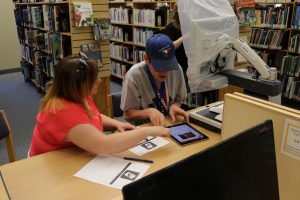 The next day, Stephen returned to try something new…Guided by the steps, he signed up for HIS OWN library card (the first time he had ever done this independently), found a new book (Harry Potter and the Chamber of Secrets, of course!) and successfully checked it out for borrowing. 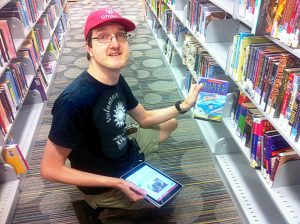 For his parents, the library staff who knew him so well, and for Stephen himself, this was HUGE!  Stephen beamed, and flapped his hands excitedly, while the library staff looked proudly on, providing the resources for such a book-lover to find his own new book. His parents were thrilled that their son had independently completed one of his favourite tasks, and felt a rare feeling – confidence that he might be able to live more independently than they had ever thought.

MagnusCards offers Card Decks for over 300 daily tasks, from library services, to banking, to personal hygiene and fun, social activities.