A blog from the Ontario Library Service

Meet the team! Check back each month to learn more about the people who help the Ontario Library Service provide seamless access to programs and services that strengthen all public libraries in Ontario. 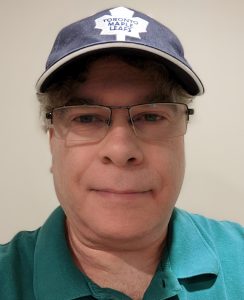 I’ve worked in the IT industry for the past 30 years. I take enormous satisfaction from helping others with learning and using technology. I’ve always been curious about how things work. That curiosity drives me to always keep learning. My work at OLS involves keeping our internal network secure and operational. I assist staff on a daily basis by providing IT solutions and troubleshooting.

My high school introduced me to a Commodore 64 and I’ve been addicted to working with computers and technology ever since. My first IT job was computer programming. I was fascinated with the logic of writing code that considers parameters and makes a predictable decision. I worked for a startup company in the ’90s that was building prototype lottery terminals for Lotto India. I started my first networking job when Novell Netware was king. For those that are old enough to remember the latest Windows O/S at that time was Windows for Workgroups 3.11.

If you could become a character from any book who would you pick and why?

There’s so many, I can’t pick a single character. My interest is science fiction particularly space exploration characters. I can easily immerse myself in an adventure involving travel and exploring the unknown.

My favourite meal is…

Food and drink are one of our great pleasures. So hard to pick one. I guess I would have to pick pizza because of the variety of meats, vegetables, spices, and cheese one can have. Pizza is a kind of assorted sandwich. Lots of good stuff!

My favourite desert island book is…

Ha. If I was stuck on an island, I would want something practical, like “How to Survive on a Desert Island” or “How to Build a Boat out of Palm Trees”.  That aside, maybe a book about an adventurer or someone in a similar predicament, like Robinson Crusoe by Daniel Defoe, for example.

A random and seldom known fact about me is…

Not anything shocking, and likely not interesting to anyone that doesn’t know me, but before getting involved into computers, I worked briefly as an apprentice electrician. The company I worked for had a contract to wire newly built Majestic Sound superstores. Part of my job was to go up a freakishly tall and shaky ladder with a ramset gun (maybe .22 caliber) to fire metal studs into steel beams so that electrical outlet boxes could be attached. The explosive charge would cause the gun to recoil a bit, which always made me fearful when balancing on the last rung of the ladder. The equipment used made it so unsafe, but a lot of jobs were like that in those days. Anyway, the point is that life can take you in different directions. One day you could be an electrician with a gun, the next day a computer programmer. The Majestic Sound stores were cool though, while they lasted: https://www.youtube.com/watch?v=KfUvXyZBAf4

What was the most personally inspiring public library related work you’ve helped make a reality during your time with the OLS?

Moving the OLS computer network infrastructure into the cloud has been among the most rewarding work experiences of my life. I love learning new things and creating a cloud infrastructure from scratch was something I had never done before. I get lots of projects, big and small. Being the only internal network operations person, I get to research, plan, and see all my projects through to implementation. I worked within large IT teams but working solo for OLS has been one of the happiest and most rewarding times in my career. It’s the perfect combination of interesting work and having the best caring people to work with.

What do diversity, inclusivity, and connection mean to you?

To me, it means treating others how I want to be treated. We all want a sense of belonging and to be treated fairly and equal. It’s up to all of us to create an atmosphere around us that embraces each other’s uniqueness and perspective. It’s one of the benefits of living in a multicultural city to work and live with people who bring diverse values, ideas, and culture.